National Ombuds Day: Are You Celebrating? 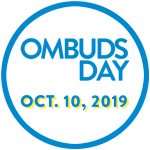 Thursday, October 10, 2019, marks this year’s National Ombuds Day—and the International Ombudsman Association invites everyone to participate. It celebrates a profession that has existed for hundreds of years and serves communities of all kinds … and, yet, not many people even know about it. Do you know what an Ombudsman does to help you?

An “Ombudsman” is an official who represents the interests of the public by receiving their complaints, usually regarding maladministration by an authority figure, and assessing them from a neutral standpoint. The Ombudsman investigates those complaints and provides a well-reasoned recommendation as to how the problem should be resolved. The term “Ombudsman” comes from an Old Norse word essentially meaning “a representative for someone.” “Ombuds” are representatives working within all sorts of institutions and communities, including governments, colleges and universities, corporations, non-profit organizations, hospitals, media outlets, and banks. Members of those communities have a safe, confidential, impartial, independent and fair neutral party, the Ombudsman, to turn to if they feel wronged. Different types of ombuds conduct investigations into these allegations of wrongdoing and provide conflict management, dispute resolution, coaching, training, recommending, reporting, feedback and analysis services, among many more helpful ways of addressing complaints and tackling problems.

One example of an ombuds potentially serving your community is ADR Chambers Banking Ombuds Office (“ADRBO”). ADRBO is a Canadian Ombudsman that provides investigative and dispute resolution services for the residents of around a dozen Ontario municipalities, as well as for the customers of some of Canada’s largest banks. ADRBO was recognized as an External Complaints Body (“ECB”) by the Financial Consumer Agency of Canada (“FCAC”) on June 15, 2015. Customers with banking complaints or municipal residents with complaints against their municipal government detail their complaints to ADRBO’s bilingual intake team. ADRBO’s Ombuds team then reviews all aspects of a complaint, including documentation and correspondence, and decides whether a full investigation by one of ADRBO’s esteemed independent investigators is warranted. A recommendation for resolution is provided for all complaints that are within ADRBO’s mandate. ADRBO is able to recommend compensation if it is of the opinion that the complainant has suffered loss, damage or harm because of an act or omission by the involved bank or municipality. These recommendations are meant to put the complainant back in the position they would have been in, if the bank or municipal government had not made a mistake. ADRBO can also look into nonfinancial harms where an issue has caused a complainant significant distress or inconvenience, loss of reputation or damage to credit ratings. Ultimately, with its review of each complaint received, ADRBO seeks to be accessible to municipal residents and consumers in order to protect them by making sure they receive well-reasoned decisions, explanations, and fair outcomes.

ADRBO has chosen to participate in Ombuds Day to do its part in helping make people aware that there are fair, independent, neutral parties like ADRBO that are accessible for investigating their complaints in many of the organizations they deal with in their lives every day. If you have read this article, you’re already participating in Ombuds Day!

ADRBO has also chosen Ombuds Day to launch an accessible information guide that details the banking complaint resolution process—take a look at our GUIDE TO THE COMPLAINTS PROCESS!

Happy Ombuds Day, from our team to you!